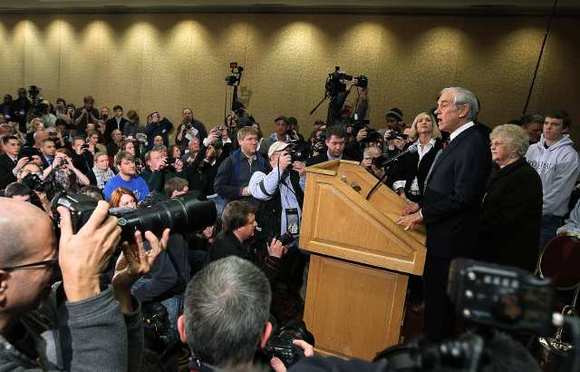 While other candidates were speaking at coffeehouses and diners on the day before the Iowa caucuses, Ron Paul was greeted by a crowd of 500 and scores of national media who packed a downtown hotel ballroom for a morning event.

“This is almost like a real rally,” the Republican presidential hopeful exclaimed. “This is great!”

Polls show Paul in a position to pull off an upset victory in the caucuses Tuesday night, an accomplishment that, if it happens, would amount to one extremely sharp stick in the eye of the GOP establishment.

The turnout had Paul’s supporters crowing.

“For somebody that doesn’t have a chance, this is some crowd,” said Monte Goodyk of Sully, Iowa. “This is the beginning of the second revolution.”

Paul was introduced by his son, Rand Paul, the U.S. senator from Kentucky.

If Ron Paul does win, it will be viewed widely by analysts as a fluke, a one-shot that will do little to derail Mitt Romney’s march to the GOP nomination. But Paul’s supporters don’t buy that — and many of them aren’t interested in supporting other Republican candidates or worrying about what the political press thinks.