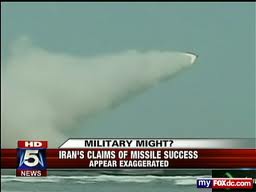 TEHRAN, Iran - At first, Iran claimed it had launched three long range missiles; a pronouncement at the end of ten days of war games in the Strait of Hormuz designed to test the patience of western nations as they weigh how to sanction Iran's oil exports.

"We are able to announce that our shore-to-sea missile systems are so powerful that we can hit any target, any time, if it's necessary" announced Habibulah Sayari, Iranian Navy Commander.

It turned out the missiles weren't that long range after all.

The Qhader missile, introduced in September, has a range of just 124 miles. The U.S. Navy's fifth fleet in Bahrain is 150 miles from Iran. Israel is four times farther.

"We've seen that they've photoshopped, for example, photographs of missile tests before to make it look more impressive than it actually is, so I would take all this with a grain of salt. I think this is mainly posturing. It's gamesmanship. And it's again meant to send a message that the Iranians aren't simply going to sit back while their oil is sanctioned," said Michael Singh, Washington Institute for Near East Policy.

Their leaders backed away from threats to close the strait as President Obama signed a defense spending bill on Saturday, which includes the new sanctions. It also has a national security waiver, allowing the president to withhold the sanctions if they are deemed to cause the price of oil to rise.