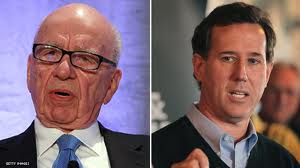 The media mogul Rupert Murdoch signaled his support for Rick Santorum on Monday evening, calling him the “only candidate with genuine big vision” for the United States.

His comments were significant not only because Mr. Murdoch controls Fox News Channel and The Wall Street Journal, but also because they were made on Twitter, a Web site that allowed for his support to be forwarded far and wide on the eve of the Iowa caucuses. Mr. Santorum was a paid analyst for Fox News before he announced his bid for the presidency last year.

Mr. Murdoch seemed to stop short of an outright endorsement. “Can’t resist this tweet,” he wrote, “but all Iowans think about Rick Santorum.” It was unclear if he was saying that all Iowa voters are thinking about Mr. Santorum, or should be thinking about him.

Mr. Murdoch started to post on Twitter on Saturday, surprising some of the tens of thousands of people who have followed his account since then. The account, @rupertmurdoch, was labeled as verified by Twitter, a step taken by the company to indicate when celebrities and politicians are the owners of accounts. When asked on Monday if Mr. Murdoch — a computer neophyte — is indeed on Twitter, his top spokeswoman, Teri Everett, said, “Oh, yes.”