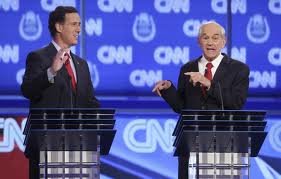 The Paul campaign has been furiously engaged over the last 24-48 hours in reaching potential voters, warning them of Santorum’s record of endorsing gun control, big government programs, runaway spending and espousing a “trigger happy” foreign policy almost identical to that of the staunchest neocons.

Paul’s campaign team in Iowa has been issuing press releases, mail shots and phone calls to potential voters, flagging up Santorum as anything but a true conservative.

Paul’s activity has Santorum seething, according to a Fox News producer who claims that the former Pennsylvania Senator told a handful of Fox News and Business reporters that “Ron Paul is disgusting,” following a Fox and Friends interview Tuesday morning.

On Monday night Santorum told voters at an Iowa Pizza Ranch that Paul was behind incessant robo calls, perpetuating false information about his campaign.

Santorum attempted to convince the crowd he is fiercely pro Second Amendment by stating that everyone in his family except for his special-needs 3-year-old daughter is an NRA member.