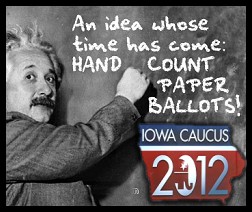 “They’re going to keep him from getting the number one spot because they are concerned.”

The host of the show refers to state GOP insiders showing “great concern” that Ron Paul is performing well in Iowa because they fear a Paul win would undermine Iowa’s position as being the first Republican primary. He implies that influential members of the Republican establishment within the state are offering sweetheart deals to prominent voting blocks in key swing districts in order to “sway” the result and ensure Ron Paul doesn’t win.

Despite the fact that this is brazenly unethical and, if bribery was involved, without doubt illegal, the host dismisses such conduct as “just politics”.

“Is it possible that the party apparatus here could be silently asking those District Chairmen to start swaying some important caucus members over to the anti-Paul side which may end up being Santorum…do you see a scenario like that happening,” he asked Benkie.

“I’ve talked to the party officials, I know they’re concerned about it,” said Benkie, adding, “Ron Paul doesn’t do us any good in Iowa, doesn’t do the country any good, will never get there, so let’s figure out what we need to do.”

Benkie said that the GOP establishment was concerned about splitting the vote between Santorum and Romney because it could increase the chances of a Ron Paul win, remarking, “We really don’t want Ron Paul to win.”

Of course they will subvert it anytime -- and rightly so. Haven't I told you a thousand times? They will NEVER allow Ron Paul to become the GOP candidate for president. You know why he should never be allowed. Only "crazies" and the profit-motivated Ron Paul props in this website who have a hidden agenda publicize that "he will be the next president of the United States". Delusional creeps hold an empty bag when the Ron Paul bubble pops out and the whole show goes kaput!
It is irresponsible for anyone to say that in national elections "vote totals" do not "change humanity". If you have no "vote" in your attempt to change humanity from bad to worse, what chance in hell do you have -- to change anything about humanity? You are not a Darwin of 2012! It will even be more stupid to think that as president Ron Paul would change Darwin’s Theory of Evolution!

My advice: Don't get caught as a fly in the ointment when talking about freedom to destroy in 2012 onward! Only the enemy within and the likes of Larken Rose who think that to shoot cops dead is an inalienable right do that.