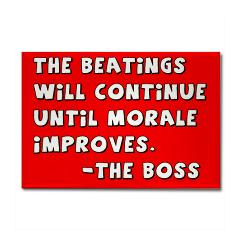 The political and media establishments, who treat a genuine dissident like a man from Mars, are lecturing Iowans that if they choose the wrong person – e.g., someone those establishments haven’t approved for them – they will "discredit" the Iowa caucuses. (These are the same people who pretend to want to "spread democracy" around the world, remember.)

But what would truly discredit the caucuses is a victory for any other candidate. For months and months Ron Paul has been ignored in favor of empty suits who expect to solve the coming fiscal crisis with a few talking points from 1983. The message wasn’t too subtle: we’ll tell you which candidates you may consider, citizen.

It is not the job of Iowans, or anyone else, to rubber-stamp the choices the establishment has told them are acceptable and safe. It is their job to make up their own minds – and if that means telling the establishment to take a flying leap, then so be it.

A Ron Paul victory would prove that Iowans are done with letting the New York Times or Rush Limbaugh do their thinking for them. It would prove that they understand what may be the most important point in all of American politics:

Whenever someone comes along with a wrecking ball he intends to set loose on a political establishment that richly deserves it, the entire spectrum of so-called mainstream opinion – from the New York Times and Meet the Press to Sean Hannity and Mark Levin – goes into Destroy mode. Nothing makes these alleged opponents kiss and make up faster than someone who refuses to play the game.

A Ron Paul victory would mean that more Americans than we could have imagined even five years ago are prepared to tell the establishment to stick it. The more you smear, the more viciously you attack, the more obvious your venom for one particular man, the more we will rally to him. Since this is the only man who truly terrifies the crooks, the flip-floppers, the thought controllers, and the whole range of so-called respectable opinion, he is obviously the one to support.

What a message that would be.

No CNN reporter will be visibly deflated if Mitt Romney wins in Iowa. Or any of the others, for that matter. That’s your tip-off.

The other theme these days is...