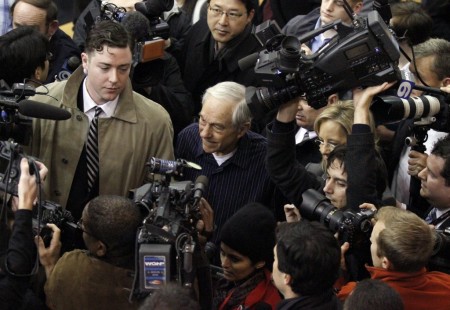 Throngs of reporters snapped photos and yelled out questions as he made his way into the school’s gymnasium. Once inside, the students offered the 76-year-0ld congressman their warmest welcome of the day.

Roughly 800 juniors and seniors gathered clapped and cheered for the Paul, who briefly sported a pair of shades. Chris Moody, a political reporter with Yahoo! News tweeted this gem: “Iowa HS girl on Ron Paul when he enters rally: ‘He’s got his glasses on. Like a BOSS.’”

U.S. Congressman Michele Bachmann, former Pennsylvania Sen. Rick Santorum and the sons of former Massachusetts Gov. Mitt Romney also addressed students at this morning’s rally — but were not treated to as enthusiastic of a welcome.

Paul had traded in his signature suit and tie for slacks and a button-down  navy blue shirt. He also departed briefly from his standard stump speech.

“I’m wondering, does anyone here know the name Kelly Clarkson,” Paul started out by asking.

The congressman went on to tell students that the former American Idol contestant had recently endorsed him.

“I have to admit, I didn’t know a whole lot about her,” he said. “But I do know that our supporters were so enthusiastic about that, that they went out and bumped up the sales of her records by 600 percent.”