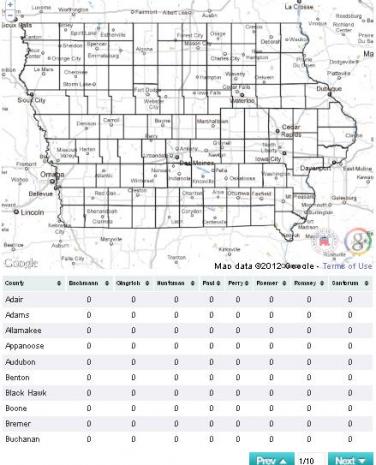 I followed the excitement to the end. Right after the caucus results were announced, Ron Paul followers suddenly stopped screaming! It has been a long orgasmic scream of victory. It turned out to be a fake orgasm.

Sadly, just a while ago, the Iowa Ron Paul bubble burst. Hot air is coming out! It is the beginning of the end for Ron Paul – just before the drop out announcement hits the headlines.

Iowa was supposed to be Ron Paul’s bailiwick. That bubble was actually a lot of bulls that freaked out. The shock came when the results were announced, meaning the proverbial cat is out of the bag. Now the bag is out for the cat in defeat where he will be kept inside that bag until the GOP finishes its job of nominating an official presidential candidate for the Republican Party.

Ron Paul supporters who are incessantly babbling in Cloud 9 to raise money that their "Manchurian Candidate" will become the next president of the United States, are now scampering for EXCUSES for his defeat. The bubble popped out and someone or something must take the blame for it.

For instance, one of those excuses is that Ron Paul DIDN’T lose this contest in Iowa – his "victory" was stolen from him! The GOP leadership stole it! [What a … *#!]

Blame it on a freaked out imagination that is now running wild. It was Perry’s fault and Bachmann’s fault for switching their votes to Romney and Santorum, "leaving Ron in the dust …"

What else … oh, yes. To our website editor Powell Gammill who is "editorializing" his support of Ron Paul on a daily basis and at the same time strangely believing this street mantra that the next president of the United States is going to be Ron Paul, demonized Santorum for beating his candidate in the polls hands down!

This is how he blames Santorum for Ron Paul’s defeat: "… barely showing up in polls to potential win [sic] the Iowa caucus in a little over a weeks time [sic] of poll shifts... streaches [sic] credulity." [Notice those "sics" … his focus is still off as Paul’s defeat obviously shocked him and paralyzed his mind.] The dust of battle had settled down, still Gammill couldn’t believe that in Iowa Ron Paul could lose to Santorum.

I think it would help ease up Gammill’s badly battered mind if we remind him of the truth that Santorum does not need to campaign to beat Ron Paul anytime, anywhere! His pro-Paul closed mind needs to open up and accept the fact that Ron Paul’s thrashing in the polls was NOT because of what Santorum did or did not do. In the first place, it was not about Santorum … it was about Ron Paul that the American people rejects, the candidate who the massive majority of the American public believed could never win the GOP nomination, much more become the next president of the United States!

Santorum was real … Ron Paul was just a figment of the imagination that our website editor romanticizes.

At least the Russian people are smart enough to march in the streets when elections are stolen. What is
the excuse of Amerikan's for their apathy?