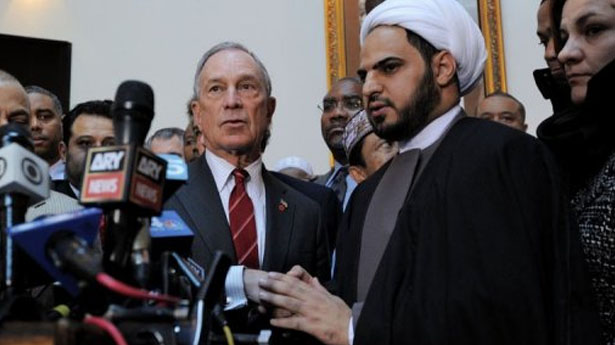 New York police arrested a man Tuesday over the firebombing of a mosque, but some say the incident reflects much deeper tensions faced by Muslim New Yorkers — and that police are partly to blame.

Police say they are investigating whether the throwing of Molotov cocktails at an Islamic center and four other sites were hate crimes.

Even before the question of motive is resolved, the unusual violence has shocked the multi-ethnic borough of Queens.

“Whether it was a senseless act of violence or a hate crime will be determined down the road. In either case, we are not going to tolerate it,” Mayor Michael Bloomberg said after meeting with Muslim, Jewish and Christian representatives at the Imam Al-Khoei Foundation, an Islamic center targeted in Sunday’s attacks.

This incident only shows the increased influence of the insidious CAIR outfit in the PC media, getting it spun as "Islamophobia" when the dude also bombed non-Muslim bldgs.  Lucky for them after he was arrested he bragged that he wanted to kill as many Muslims as he could; I'm sure he would also have said Hindus or Christians if they'd asked him :) Islam is about supremacy, so that's all that matters to CAIR and those it can influence.

Where does CAIR come from and how does it fit into the global Muslim conspiracy? http://tinyurl.com/muslimscope

GET READY: They're Preparing For A MAJOR Domestic Conflict!