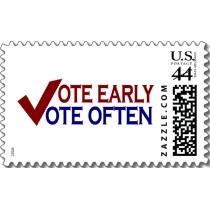 Santorum has no organization, never drew over 100 people during his entire campaign. Of course he did bribe and received the benediction of of that 'family' leader who demanded 1 million dollars that were to be distributed in part to cronies. This is the biggest fraud since Kennedy stole the West Virginia Primary. Perry had built a pretty organization and was around 13% of the vote. He drew far larger crowds than Santorum and ends up with just 10%. Did those votes go. Santorum? Santorum didn't earn 24% of the vote."

Grand Theft Iowa? This looks like a scripted excuse for Ron Paul’s defeat in Iowa. There is no evidence showing that anything was "stolen" from Ron Paul. I would like to sink my teeth on that evidence. However, if it is true that the GOP leadership has stolen Paul’s "victory" in Iowa, then that’s your proof – that the GOP will never allow Ron Paul to become the Republican Party’s official presidential candidate for 2012 even though he won in the polls.

Sooooo … it is now REALITY time. Since Ron Paul’s eventual elimination from the race stares in the face of reality, it is time to gather hays while the sun still shines.

I am referring to the business side of Ron Paul’s candidacy, which will soon be over. Profiteers using the maverick’s campaign for president to their personal advantage are busy making money just before his time to quit is announced.

Lately, business supporter Provident Metals minted a lot of Ron Paul 2012 coins with Ron Paul’s face in it. It contains a 1-Avoirdupois ounce of .999 fine copper. It is priced as low as $1.49 but the bulk sale of the minted coin is really a big business to profit from. Profiteers expect a big haul.

The copper round extols Ron Paul’s "fight" for "peace, freedom and prosperity".

These are of course, all false. There is no "peace" for Ron Paul when he is always in a "fight" for anything in front of the camera. The "freedom" he is fighting for, is freedom to destroy, i.e., the "freedom to drink raw milk" and contract Salmonella, E. Colis and Listeria, the freedom to spread an epidemic [quote from Tan]. And prosperity? In his dream …

Here’s the irony: Ron Paul attacks the Federal Reserves for its propensity to mint metal money and print paper money that in his economics learned from the practice of Medicine, blow up inflation sky high. But as long as his face appears in those bubble money, it is all right. It is okay when he is just a failed candidate for president, how much more if he is president? By then it would be more than okay. The country will be awash with Ron Paul coins and paper money!

Dangerous! Don’t you think? It reminds you of Saddam Hussein in Iraq’s reign of terror where the Dictator’s pictures were all over the place.

I noticed that Ernest Hancock had announced that he is coming out with a magazine on this Grand Theft in Iowa. The ads would bring forth a calculated amount of revenue. He wishes that you and I became subscribers. He is aware that the sun would soon stop to shine on Ron Paul.

I hope he makes as much profits as Provident Metals expects to make while Ron Paul is still running.

That’s not freedom, of course. Just pure business! Just like what the Provident Metals people think: We can talk about freedom on our way back … back from our trip to the bank.

Wake up. It's not those who vote that count. It's those who count the votes.

So now we know it as fact. What Ernie has been saying all along has been proved out. FBI and CIA hackers are way more able than Anonymous hackers. And the voting system is the easiest thing to hack.

And if it didn't have anything to do with hacking, the crooks in Government are so smart that they have all the rest of the avenues of free and honest voting covered, so that they control the whole thing any way that they want.

Sounds like a "sour grapes" attitude to think this way, doesn't it? Well, if you were looking for freedom, and peaceful freedom through Ron Paul, you're going to have to start to understand that your freedom is only going to come to you when you decide that your freedom fight is worth dying for. And dying for something has to do with a REAL fight, not necessarily a peaceful fight.