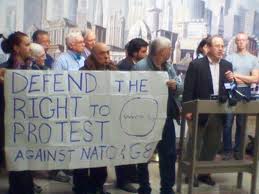 Mayor Rahm Emanuel made an admission on Tuesday: He “made a mistake” when he claimed that extraordinary security measures he proposed to handle protesters who descend on Chicago for the NATO and G-8 summits would be temporary and repealed after the events are over.

The mayor’s about-face apparently means the only thing temporary about the changes will be the power to purchase “goods, work or services” needed to host the May 15-22 event at McCormick Place without City Council approval.

But the other changes will be permanent. They include: dramatically higher fines for resisting arrest; more surveillance cameras; parks and beaches closed until 6 a.m.; sweeping parade restrictions and higher fees for those events and empowering Police Superintendent Garry McCarthy to “deputize law enforcement personnel” and forge cooperative agreements with a host of state, federal and local law enforcement agencies.

That’s not what the mayor said last month when he introduced the changes at a City Council meeting. At that time, he emphatically stated that the changes he sought were “temporary,” “one-time only” and “just for this conference.”

1 Comments in Response to Rahm Emanuel on duration of NATO-G8 rules: ‘I made a mistake. Real simple, OK.’

No, you ARE a mistake, you lying son of a bitch.