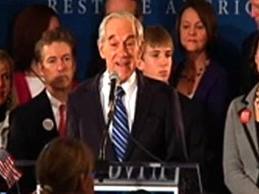 Ron Paul placed third in the Iowa Republican Caucuses, trialing closely behind Mitt Romney and Rick Santorum. The only antiwar candidate reaped tens of thousands votes in the first campaign event of the pro-war party.

Paul didn’t come in first place, due apparently to Romney’s “electability” and a mysterious and rapid surge from Santorum, who was the only candidate yet to have experienced one. He lost to two of the most belligerent pro-war candidates in recent memory.

Towing the hawkish line, whether for a war of aggression against Iraq in 2003 or for maintaining an empire of bases peppered across the planet, is practically a religious commitment for Republicans. Paul broke from that and has succeeded to an extent that would have been unthinkable only five years ago.

In the 2008 Iowa Caucus, Paul came in fifth place with under 12,000 votes. His progress this year has been gradual, contrasting sharply with the erratic ups and downs most other candidates have experienced. Unlike last time around, Paul wasn’t ridiculed and laughed at with derision by the other candidates. Instead, they implicitly and explicitly acknowledged his credibility.