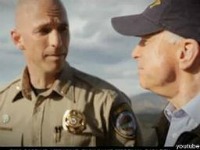 It seemed like only a matter of time, but Pinal County Sheriff Paul Babeu announced this morning that he'll run for Congress in Arizona's Fourth Congressional District.

"The American people are sounding a giant 911 call on Washington," Babeu says. "And I'm responding."

"Right now, the biggest threats facing our country are from Washington," he says. "We have record debt and deficit spending, the biggest intergenerational theft in the history of the world. We have a system that punishes job creators and leaves many millions unemployed. We have an unsecured border that allows the drug cartels to operate freely in our country, and results in 400,000 illegal crossings into our state every year."

Arizona's CD-4 is one of the larger districts formed by Arizona's Independent Redistricting Committee. It includes most of Mohave and Yavapai counties and some outlying parts of the metro Phoenix area.

2 Comments in Response to Sheriff Paul Babeu: "It's Time For a New Sheriff in Washington." Announces He'll R

Sheriff....if you`re smart you will not share any space with the Songbird/Navajo destroyer/Peabody Coal Co investor....we don`t like him at all.

You know the old saying "Songbirds of a Feather run together".

You don`t live too far from the Navajo right! why don`t you run up there and have a talk with them before you join hands with politicians like McCain.

How about a new sheriff in our local communities that is actually there to serve and protect the people in his community?  As long as we have politicians we will always have misery, suffering, death and wars.