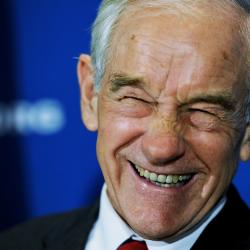 After weeks of intense and sustained smear attacks by the establishment media, during which Paul was labeled everything from “dangerous,” to “disgusting,” to “racist” and even called a “terrorist,” the Texan Congressman still managed to secure 26,219 votes compared to 11,841 votes in 2008 – finishing third behind Romney and Santorum.

Crucially, Paul has obtained an equal number of delegates to both Santorum and Romney – seven in total.

“Paul may actually be the real winner of the first Republican voting contest,” writes Grace Wyler. “That’s because Paul’s massive organizational push in Iowa focused on both winning votes, and also on making sure that Paul supporters stuck around after the vote to make sure they were selected as county delegates — the first step towards being elected as a delegate to the Republican National Convention.”

In comparison to Ron Paul doubling his tally, Mitt Romney received marginally less votes than he did in 2008 despite the millions of dollars his campaign spent in the state. Indeed, as Michael Brendan Dougherty notes, “75 percent of Republican Caucus-goers want someone that isn’t Mitt Romney – a result that reflects polls nationwide.” Romney is also expected to perform poorly in the southern states, where his brand of big government isn’t welcomed.

Saying he was the recipient of “one of three tickets out of Iowa,” Paul noted that Rick Santorum’s surprise showing is highly unlikely to be replicated anywhere else, and that he and Romney were the top two going into next week’s primary.