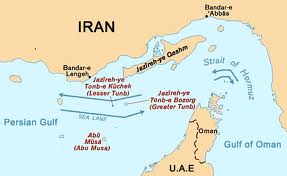 The closure of an international body of water is an act of war. If Iran implemented such a policy in the Strait of Hormuz, it would thus constitute an act of war. This is because in order to do so, this country would have to physically violate the rights of peaceful shippers. One might object that at present, Iran has only threatened to close the Straits of Hormuz. However, in my understanding of libertarian theory based upon the non aggression principle (NAP) not only are people (or governments!) not permitted to actually invade, or violate the rights of peaceful individuals, they are not entitled to threaten this either.

However, before we unduly criticize the Iranians for this threat, let us put the matter in context. The U.S. government has also threatened a blockade of Iran. With many statements emanating from Washington D.C. to the effect that the U.S. government "is not taking anything off the table," they are menacing actions a lot more serious, and invasive, than a mere blockade.

Why is the U.S. acting in so bellicose a manner? This is because it seems to be a settled part of present American policy that Iran should not persists in its (supposed) goal of arming itself with nuclear weapons.

Now, somewhat paradoxically, I agree with the Obama administration on this matter. Iran should not have nuclear weapons. But, neither should anyone else! Why not? This is because they are necessarily offensive. This type of ordnance cannot be used in a way that distinguishes between the guilty and the innocent. States Rothbard in this regard: "… while the bow and arrow and even the rifle can be pinpointed, if the will be there, against actual criminals, modern nuclear weapons cannot. Here is a crucial difference in kind. Of course, the bow and arrow could be used for aggressive purposes, but it could also be pinpointed to use only against aggressors. Nuclear weapons, even ‘conventional’ aerial bombs, cannot be. These weapons are ipso facto engines of indiscriminate mass destruction." (For a further elaboration of this thesis and a discussion of its implications, see here.)