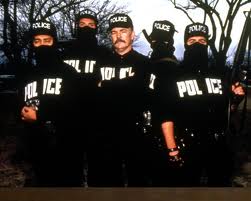 Bad laws attract bad people to enforce them – while pushing out the good (and semi-good) people. It’s a sort of Gresham’s Law as applied to human society. And more, a sort of authoritarian feedback loop that makes the situation progressively worse as time goes by.

Consider the position of “law enforcer” in 2012 America. What does it entail? When we had peace officers, it mostly meant going after thugs – people who victimize others by threatening them with violence. Frauds and crooks, too. In brief, it meant going after those who violate the rights of others.

It was – generally – an honorable way to earn one’s living. Most citizens therefore respected cops – or at least did not actively dislike and fear cops. Most cops were “ok.” They – generally – could be counted on to leave you alone unless you’d actually done something to warrant not being left alone. It was a quid pro quo that made sense no matter which side of the fence you happened to be on.

Today, it is law enforcement that threatens harmless, morally (if not legally) innocent people with violence. The guy who, for example, grows a small batch of pot plants in his backyard (as opposed to the lawful citizen who brews his own beer). Or the seatbelt scofflaw – whose actions threaten harm to none except, perhaps, himself (and even then, only potentially). Or the farmer who sells “unapproved” milk to his neighbors. And the students who dare to exercise their right to peaceable assembly. The driver who declines to be a witness against himself and refuses to submit, sans warrant – and very often, sans probable cause – to a random stop and search of his vehicle and person.

The list of victimless crimes – and latter-day victims of law enforcement – is long. Citizens are aware of the creepy fact that being a peaceful, harmless person who respects the rights of others is no longer sufficient to avoid becoming the target of a law enforcer. That the law increasingly targets people who have violated no other person’s rights – but who have violated “the law.” That is, who have committed some affront against the state.