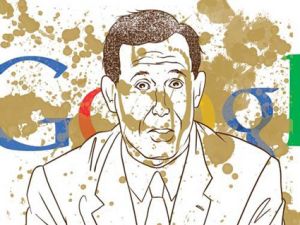 Rick Santorum would very much like to be president. For the past few years, he has been diligently appearing at the sorts of conservative events—the Values Voters Summit, the Conservative Political Action Conference—where aspiring Republican candidates are expected to show up. But before he starts printing "Santorum 2012" bumper stickers, there's one issue the former GOP senator and his strategists need to address. You see, Santorum has what you might call a Google problem. For voters who decide to look him up online, one of the top three search results is usually the site SpreadingSantorum.com, which explains that Santorum's last name is a sexual neologism for "the frothy mixture of lube and fecal matter that is sometimes the byproduct of anal sex."

Santorum's problem got its start back in 2003, when the then-senator from Pennsylvania compared homosexuality to bestiality and pedophilia, saying the "definition of marriage" has never included "man on child, man on dog, or whatever the case may be." The ensuing controversy prompted syndicated sex columnist Dan Savage, who's gay, to start a contest, soliciting reader suggestions for slang terms to "memorialize the scandal." The winner came up with the "frothy mixture" idea, Savage launched a website, and a meme was born. Even though mainstream news outlets would never link to it, Savage's site rose in the Google rankings, thanks in part to bloggers who posted Santorum-related news on the site or linked to it from their blogs. Eventually it eclipsed Santorum's own campaign site in search results; some observers even suggested it may have contributed to Santorum's crushing 18-point defeat in his 2006 campaign against Bob Casey.

Savage says his site hasn't been updated for years, yet it remains entrenched in the Google rankings. Not even Santorum's ascent as a Fox News contributor or his early campaign swings through the key primary states of Iowa and New Hampshire have managed to bury it. With Google results like this, what's an aspiring presidential candidate to do?

I wanted to ask Santorum whether he had a strategy for scrubbing his Web presence, but he didn't return my calls. So instead, I asked a few experts. "This is an unusual problem," says Michael Fertik, CEO of ReputationDefender, which specializes in helping individuals maintain a positive Web presence. "It's devastating. This is one of the more creative and salient Google issues I've ever seen."

Fertik, who points out that he is not a supporter of the former senator, notes that more than anything, Santorum needs to act quickly. Once the campaign starts to make headlines again, an increase in search traffic will likely help maintain Savage's high spot in the rankings: "It's going to be very hard to move."

To at least make a dent, Santorum could try a concerted push to generate links to his domain on prominent sites and blogs, ginning its Google ranking; Mark Skidmore, an expert in search-engine marketing at the online strategy firm Blue State Digital, says Santorum should also consider buying paid search results for his name. He says the Obama campaign successfully used this strategy to help bury sites that claimed Obama was a Muslim or not an American citizen. But like Fertik, Skidmore thinks Santorum faces an uphill battle, in part because Savage's site has been up for so long—with more than 13,000 inbound links, compared with only 5,000 for Santorum's own site, America's Foundation. "He's staring at a very big deficit," Skidmore observes.

That deficit might grow even bigger soon. "I've sort of been in denial about the fact that Rick Santorum is going to run for president," Savage says. "But now I'm going to have to sic my flying monkeys on him"—in other words, mobilize bloggers to start posting and linking to his site again.

Savage has not forgiven Santorum for his seven-year-old comments: "Rick would have prevented me and my partner from being able to adopt my son," he points out. But Savage does have a deal for the politician. "If Rick Santorum wants to make a $5 million donation to [the gay marriage group] Freedom to Marry, I will take it down. Interest starts accruing now." Santorum may want to consider Savage's offer. Otherwise, he's kinda screwed.