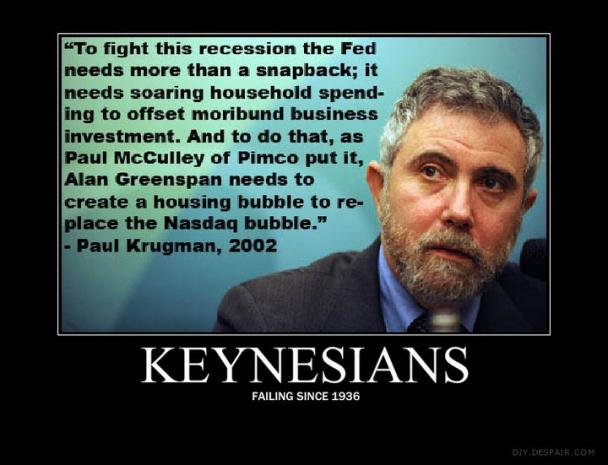 Free-Market Analysis: Paul Krugman is at it again, defending the socialist economics of John Maynard Keynes against the common sense of normal people. Nobody understands debt, he writes, except of course for ... him. Krugman.

He understands it so well that he is convinced that nations can borrow their way to prosperity. Krugman, who evidently doesn't like people, prefers to deal in abstracts like "nations" – as if nations are not actually composed of people. Krugman sees only the broadest picture.

Generally, Krugman, the winner of the faux Nobel Prize for Economics, is not much enamored of human beings. He has specialized, in fact, in the sophistry of non-human economics. That is, he has made a career – and won a "Nobel" prize – for using econometrics to create models of ways that governments can use tariffs and industrial planning to protect and nurture nascent companies.

All of this, of course, denigrates, or at least bypasses, the individual. Krugman is the original anti-Austrian. Where Austrian, free-market economists see the capacity of the individual human to think and act for himself or herself, Krugman merely sees moveable game pieces to be disposed of at will by their respective governments.

For Austrians, every government, monopoly action is methodology of force doing damage to the delicate fabric of voluntarism and free markets. Too much damage and life becomes Hobbesian – "nasty, brutish and short."

Jamie Dimon One-Ups Goldman: Says He Would Be "Surprised" With Just 4 Rate-Hikes

The Fed is Trapped: Crash The Market, Or Let Inflation Rip?

The Fed's Catch-22 Taper Is A Weapon, Not A Policy Error