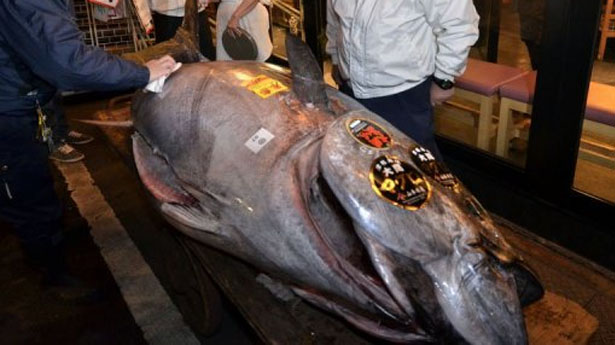 A deep-pocketed restaurateur shelled out nearly three-quarters of a million dollars for a single tuna, the most ever paid for the fish, at Japan’s Tsukiji fish market on Thursday.

The 269-kilogramme (592-pound) bluefin — caught off the coast of Japan’s northern Aomori prefecture — stood at an eye-popping 56.49 million yen ($736,500) when the hammer came down in the first auction of the year.

The figure dwarfs the previous high of 32.49 million yen paid at last year’s inaugural auction at Tsukiji, a huge working market that also features on many Tokyo tourist itineraries.

Thursday’s winning bidder was Kiyoshi Kimura, president of the company that runs the popular Sushi-Zanmai chain.

At around 210,000 yen per kilogramme, a single slice of sushi could cost as much as 5,000 yen, but the firm plans to sell it at a more regular price of up to 418 yen, local media reported.