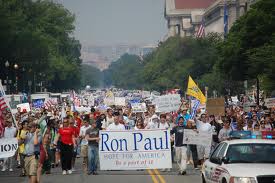 A few belated thoughts on Ron Paul and the Iowa caucuses.

Certainly it’s a disappointment. Some people counter that what matters are the delegates, but in my opinion what actually matters right now is momentum, and an Iowa victory would have been great in that department. At the same time, 22% in a state that is not ideologically in Ron’s camp, with all the media hate and ridicule so intense for two solid weeks – and heck, with Ron’s opposition to ethanol subsidies thrown in – is nothing to sniff at.

So many people worked so hard in Iowa for this 20+% showing – particularly A.J. Spiker, David Fischer, and Drew Ivers, all friends of mine – and we owe them our thanks.
As a knowledgeable friend explained to me in 2008, it is extremely difficult to reach many traditional voters, who decide on which candidate to choose on the basis of how much he sounds like the typical GOP product they’ve come to expect. So they listen for a speech that says, “I love America, Americans are the awesomest of the awesome, we need jobs, Obama is bad, war war war – and did I say Americans were the most awesome people ever, in the most awesome country, and the only reason anyone might not be thrilled with our government is because of our sheer awesomeness?”