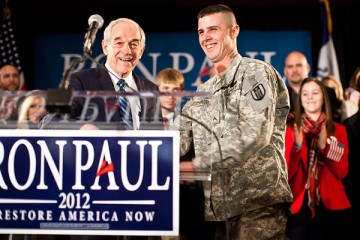 The US Army said Wednesday that it is considering disciplining Reserve Corporal Jesse Thorsen, the soldier who spoke out against a militaristic foreign policy at Ron Paul’s post-Iowa caucuses rally.

After being cut short during a CNN interview Thorsen, who has served two tours in Afghanistan and was due to head back for a third, was invited on to the stage by Paul himself to address Paul’s cheering supporters.

“If there’s any man out there that’s had a vision out there, it’s definitely [Ron Paul],” Thorsen said. “His foreign policy is by far, hands down better than any other candidate’s out there, and I’m sure you all know that. We don’t need to be picking fights overseas and I think everybody else knows that, too.”

Apparently someone within the military infrastructure did not take kindly to Thorsen’s remarks, and set about attempting to punish the 10-year veteran for his words.

Detractors are now going to great lengths to point out that because Thorsen was in uniform, he was technically in breach of military protocol when he praised Paul’s foreign policy positions.

Department of Defense Directive 1344.10 permits troops to attend political activities so long as they are not in uniform.