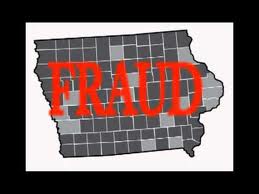 Thanks to the transparent, open counting process at Tuesday's night's Iowa GOP Caucuses, and a Ron Paul supporter who was paying close attention to the results, we may now be learning that Rick Santorum, not Mitt Romney, actually won the "First-in-the-Nation" Iowa Caucuses this week.

According to a report tonight from television station KCCI NewsChannel 8 in Des Moines, Edward True, a supporter of Paul's says he participated in the counting at the Washington Wells caucus in Appanoose County and wrote down the results he witnessed there on a piece of paper which he posted to Facebook that night. Later, in comparing his totals to the precinct results made available on the Iowa GOP website [CSV version here], he noticed that Romney is shown as receiving 22 votes at that precinct, rather than the 2 that True recorded him as receiving that night at the caucus.

If True is correct, and if no other anomalies are discovered in the coming days, it would mean that Santorum will have won the Iowa Caucuses by 12 votes, rather than lost it to Romney by 8, as reported by the GOP in the early morning hours on Wednesday...

Edward True, 28, of Moulton, said he helped count the votes and jotted the results down on a piece of paper to post to his Facebook page. He said when he checked to make sure the Republican Party of Iowa got the count right, he said he was shocked to find they hadn't.
...
True said at his 53-person caucus at the Garrett Memorial Library, Romney received two votes. According to the Iowa Republican Party's website, True's precinct cast 22 votes for Romney.

"I imagine it's a good possibility that somebody instead of hitting 2 might have hit 22 by accident," True said. "I hope so."

But he said he won't stop talking about it until the state --- by his count --- gets the numbers right.

"Numbers that I personally witnessed being counted and assisted in counting and am certain are right," he said.