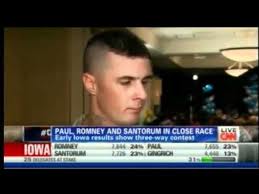 You can see that they have the technology to make the feed "go bad " whenever they want. Please Re-post. This should END CNN as a network. Advertisers should boycott them and shut them down. ... 'Make note of this.' CNN says the reason for this was a failed satellite feed. When they come back to the newsroom if you look behind him on the left side there is another caucus feed that is likely using the same sat. uplink that is? grooving along just fine. This is bull--it. – From YouTube User solarpowerhome

Free-Market Analysis: So a handsome US vet – several tours in Afghanistan – starts to say on a CNN broadcast that he doesn't believe in an aggressive military stance abroad. He starts to say, in fact, that Israel is capable of taking care of itself when it comes to Iran.

He doesn't finish the statement, though. Instead, static interrupts his points and the interview is cut off. Wolf Blitzer explains that technical interference had prematurely ended the interview. You can see the video below.

Later on, Anderson Cooper circles back around to the incident, saying bluntly that "a lot of people online" probably believed that the incident was manufactured, followed by nervous laughter from all the analysts gathered round. You can see that video here (skittles2055's YouTube user channel, at http://www.youtube.com/watch?v=Kfq3mLzAi-0):

No worries! Bret Bozell is going to take care of the "MSM"...send him a donation..ha ha.The only good thing about that group is Jodi Miller for sure.

That second video ISN'T WORTH THE TIME TO WATCH.

See all of the 'link boxes' in the video?  They cover the screen so you can't see the video!

I tried leaving a comment there, but it is 'moderated' and what I wrote will NEVER see the light of day, I would bet money.