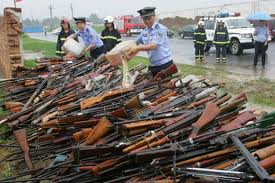 Firearms freedom is on the march across America. In recent years, there have been many legislative successes for American gun owners, and I'm pleased to report that some of the best have been in the American Redoubt states. Onerous gun laws that had placed too much arbitrary discretion hands of a few political appointees have been rolled back. Meanwhile, "Castle Doctrine" and "Stand Your Ground" laws have been enacted, and strong assertions of State Sovereignty have been enacted. This animated graphic from the Wiki world, showing the advance of non-discretionary ("Shall issue") CCW permits, is guaranteed to make Chuck Schumer and the other rabid gun grabbers go apoplectic.

The best news is that in Wyoming, permitless concealed carry went into effect in July, 2011. In Wyoming, it is now legal for adult citizens to carry a loaded gun or concealed--in your car, on your quad, on your horse, or afoot--with no permit required. (Previously, this right had only been recognized if the gun was carried in plain view.) This change emulated Vermont's long-standing policy, and followed similar legislative moves in Alaska and Arizona. This used to be called "Vermont Carry", but it is catching on and has now been dubbed Constitutional Carry. (As our friend Tamara aptly put it, the new term was needed becuase "Vermont-Alaska-Arizona-Wyoming Carry is too much of a mouthful.")

Some bad news is that efforts to enact this in three other Redoubt states were either tabled or vetoed in 2011. But at least open carry is unrestricted in most Redoubt locales, and CCW permits are non-discretionary in all of the Redoubt states.