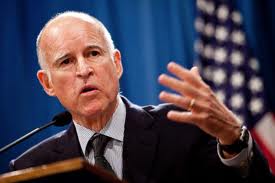 California (STOCA1) Governor Jerry Brown proposed $92.6 billion in spending for the year starting in July, an increase of about 7 percent, which will count on voters approving $7 billion of higher taxes in November.

The spending plan foresees a deficit of $9.2 billion through the next 18 months. Almost half of that is in the current fiscal year, he said. He called for $4.2 billion in cuts, mostly to welfare and programs for the poor. If the tax increase isn’t passed, Brown’s plan would cut another $4.8 billion in support for public schools and community colleges.

“The state of California (STOCA1) is a very generous, compassionate political jurisdiction,” Brown said. “When we have to cut spending, that spending is going to come from programs that are doing a lot of good. It’s not nice. We don’t like it. But the economy and tax statutes of California make just so much money available.”

He ain't old enough,yet. Maybe when he gets to 77, he will want to reduce taxes (don't hold your breath).

There is a certain amount of borrowing that the Fed needs done to maintain its overall status and control until the new One-World currency is in place. If it is too little, the Fed collapses. If it is too much, money comes into supply again and people become too free. It has to be just the right amount.

What does this have to do with raising taxes? EVERYTHING. Taxes are backing for the loans from the Fed. If you see taxes go up in a big way, what you are really seeing is the credit of Government go up, so that Gov can borrow more money from the Fed-eral Reserve Bank. And the Fed creates it out of thin air. Then we or Gov pay it back to the Fed through the labor of our hands and the sweat of our brow. The Fed gets FREE value on their thin-air creation - money.