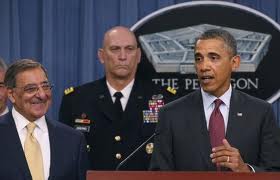 WASHINGTON (Reuters) - President Barack Obama unveiled a defense strategy on Thursday that would expand the U.S. military presence in Asia but shrink the overall size of the force as the Pentagon seeks to reduce spending by nearly half a trillion dollars after a decade of war.

The strategy, if carried out, would significantly reshape the world's largest military from the one that executed President George W. Bush's "war on terrorism" in Iraq and Afghanistan.

Cyberwarfare and unmanned drones would continue to grow in priority, as would countering attempts by China and Iran to block U.S. power projection capabilities in areas like the South China Sea and the Strait of Hormuz.

But the size of the U.S. Army and Marines Corps would shrink. So too might the U.S. nuclear arsenal and the U.S. military footprint in Europe.

Troop- and time-intensive counter-insurgency operations, a staple of U.S. military strategy since the 2007 "surge" of extra troops to Iraq, would be far more limited, with the force no longer sized for large-scale, long-term missions.

"The tide of war is receding but the question that this strategy answers is what kind of military will we need long after the wars of the last decade are over," Obama told a Pentagon news conference alongside Defense Secretary Leon Panetta.