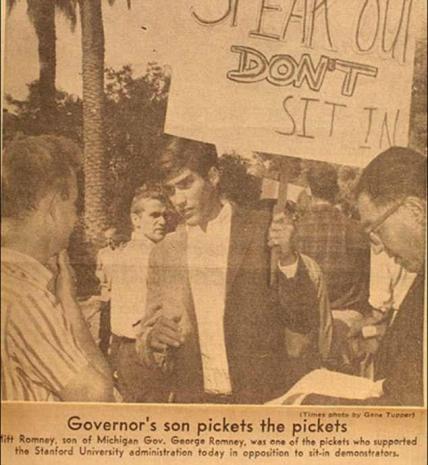 They say every picture tells a story.

The veteran Republican, then 19, can be seen picketing an anti-war sit-in at Stanford University in Palo Alto, California, in 1966.

Mr Romney will no doubt be proud of his younger self taking what was at the time a very unpopular stance.

However, he might grimace at his clean-cut appearance and preppy wardrobe. Taking a stand: A young Mitt Romney holds up a placard at a pro-draft demonstration at Stanford University in Palo Alto, California, in May 1966 Fortunate son: Mr Romney's status as a 'Mormon missionary' meant he was exempt from the Vietnam War draft

Taken at the height of the swinging Sixties, Mr Romney holds a sign declaring 'Speak Out, Don't Sit In' as, alongside like-minded individuals, he proclaims his support for Lyndon Johnson's ever-expanding draft.

But, in a marked contrast to the relaxed  dress sense associated with that decade's youth movement, he is wearing smart white slacks, a white buttoned-up shirt and a dark blazer.

A newspaper clipping headlined 'Governor's son pickets the pickets' states: 'Mitt Romney, son of Michigan Gov. George Romney, was one of the pickets who supported the Stanford University administration in opposition to sit-in demonstrators.'

The photograph was taken on May 20, 1966, shortly after a group of students had taken over the office of Stanford University President Wallace Sterling.

They were protesting at the introduction of a test designed to help the authorities decide who was eligible for the draft.

Mr Romney was one of approximately 150 conservative students who counter-picketed the sit-in.

Carey Coulter was one of the demonstrators alongside Mr Romney that day. He told BuzzFeed.com: 'We were there to get an education and these people holding the administration hostage was antithetical to that.

'Mitt walked up to me and said that he had some experience with the press, and that he would handle the press for me if I wanted him to. I said fine, because I was busy running the demonstration.

'I don't recall ever seeing him again.'