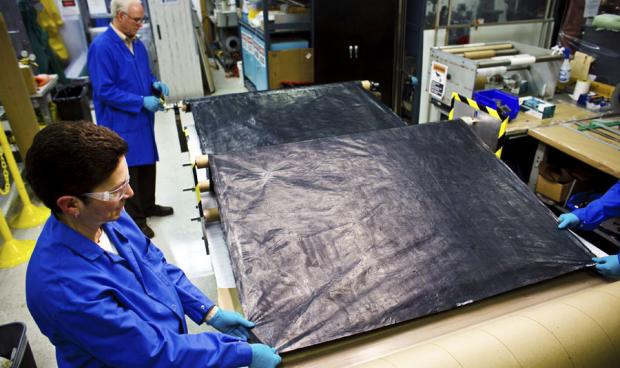 At a small factory in Concord, New Hampshire, workers at the startup Nanocomp Technologies are turning carbon nanotubes into paper-thin sheets many meters long. The nanotubes, which are each just a few billionths of a meter wide, are among the strongest and most conductive materials known. For decades researchers have dreamed of using them to make super-efficient electrical transmission lines, suspension bridges that can span several kilometers, and even elevators that convey satellites into space. But while some companies have succeeded in making useful products by mixing nanotubes with resins to create composites, it's been difficult to make materials with properties that reflect those of the individual nanotubes. By making large sheets composed of nanotubes alone, Nanocomp has taken a big step in that direction.

The sheets are still not as strong or conductive as individual nanotubes, but they can provide a lighter replacement for copper and other conventional materials in some applications, including protective shielding for coaxial cables. Nanocomp's first customers are NASA, which has used nanotube sheets to shield a deep-space probe from radiation, and the U.S. military, which could use the sheets to reduce the weight of the electrical cables on unmanned drones by half, increasing flight times.

Nanotubes are made by feeding alcohol and a catalyst into a furnace at high temperatures and pressures. Nanocomp has fine-tuned the process to produce relatively long nanotubes that emerge from the furnace to form networks that can serve as the basis for sheets. Practical large-scale manufacturing is the critical first step to futuristic applications, says John Dorr, the company's vice president of business development. That will get nanotube products out of the lab and to the market at competitive prices.

Dr. Reiner Fuellmich: "They are making so many mistakes, we are close to a tipping point"

Dr. David Martin - How Did We Get Here?

On the Connection Between Graphene Oxide Found in "Covid Vaccines",