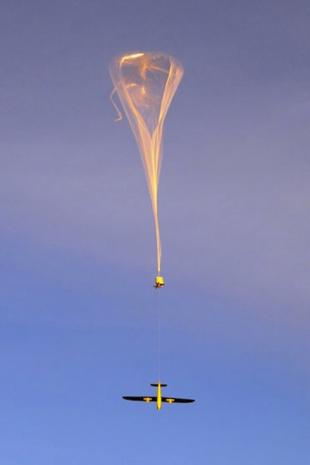 It just might be the most convoluted spy program in the Pentagon’s history: Fly a balloon up to 60,000 feet, and have it unleash a drone. Then, have that drone deploy several smaller surveillance drones that glide to the ground and collect data. Rube Goldberg, call your office.

The elaborate plot comes courtesy of the Naval Research Laboratory (NRL), which recently announced successful completion of flight tests for their new, Autonomous Deployment Demonstration project. The goal sounds simple enough: land small, sensor-laden drones at precise locations, without being detected. That’d allow military personnel to have better intel inside enemy terrain, and avoid putting themselves in harm’s way to deposit the devices.

But the anodyne title and seemingly simple goal don’t begin to get at the complexity of the project.

The Navy started with a high-altitude balloon. To the end of the balloon, they attached a simple, mid-sized Tempest drone — each one has a 10-foot wingspan and can carry a 10-pound payload.

But we’re not done yet. The Tempest, in turn, is carrying two tiny Cicada drones — one under each wing.