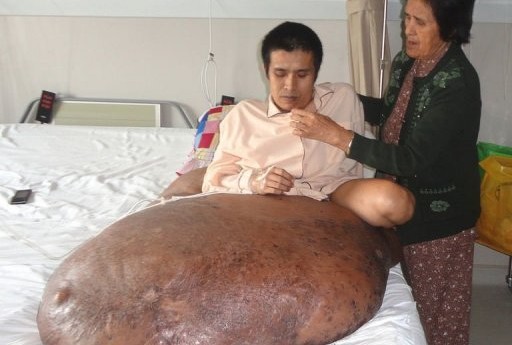 A man left unable to walk by a tumour on his right leg that weighs more than the rest of his body went under the knife in Vietnam on Thursday to have the growth removed, hospital officials said.

Nguyen Duy Hai’s massive 90 kilogramme (198 pounds) tumour is to be cut away by a team of doctors in a risky 10 hour procedure that has only a 50 percent chance of success, the France-Vietnam (FV) hospital in Ho Chi Minh City said.

Hai, 31, who suffers from a rare genetic disorder, has been living with the tumour since he was four years old, FV hospital’s statement read.

He had part of his leg amputated when he was 17, but the tumour, which is not cancerous, continued to expand, making it difficult for Hai to walk and sleep.

Your Teflon Cookware Could Be Toxic. Here's How to Tell