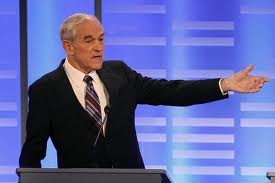 ('ya just gotta let them have their say :)

Observe this New Hampshire GOP debate CAREFULLY, and be honest to yourself of what you are looking at in this Videotape …! It is hard to cover up … it is hard to deny that Ron Paul stood up as a SORE THUMB in the debating panel!

He was worse than Obama standing there fuming and salivating in telling the American public that all the GOP candidates except him, are the dirtiest scams of the earth! Can you believe that???

For Heaven’s sake – he should have been shown the door on the way out right then and there! For, it’s obvious -- Ron Paul allowed himself to be Obama’s destructive weapon against the Republican Party in the coming 2012 presidential campaign. In the GOP, he is Obama’s self-destruct Manchurian Candidate programmed to destroy … Obama will use this weapon in the campaign trail … you mark my words!

In this New Hampshire debate, Ron Paul did nothing but SLANDER, Romney, Santorum and Gingrich of his delusional innuendoes. And the four of them, including the other candidate Perry, pointed out that Ron Paul ALWAYS makes accusations NOT based on facts … in short, what they are saying is that Ron Paul is a despicable LIAR! His lunatic accusations were FALSE and DELUSIONAL – anything at all he will spit out in front of the camera to catch public attention.

Also in this debate, Ron Paul’s published "racism letter" pinned him down as a congenital LIAR. He tried to wiggle out of the hole where he was trapped by denying that although what has been published UNDER HIS NAME some twenty years ago proved that he was a racist, he claimed HE DID NOT WRITE IT! The public is not stupid, as if he was talking to a retarded audience! But when one is delusional, don’t expect a person to be aware of what has just been said!

Although Ron Paul denied he wrote those racism charges, he went ballistic in slandering this nation that Blacks are discriminated against – an admission that as a racist, he was a Caucasian Black Supremacist! He wants Blacks to rise against the Whites and plunge this nation into a racial civil war!

Just a few days before this New Hampshire debate began, a NH newspaper had published a warning that Ron Paul was a "favored candidate of the lunatic fringe". It was followed by MSNBC’s description of Ron Paul [Chris Mathews’ talk show] that Ron Paul was "a delusional, paranoid, racist conspiracy theorist." In this perilous time in the history of the United States, "Paul was indeed a demon sent from the depths of hell to destroy humanity and plunge the planet into eternal darkness."

Note carefully that these are not my words. I am not attacking Ron Paul. I am just an opener of Ron Paul’s can of worms that the electorates have the right to know.

This Ron Paul highlights Video of the New Hampshire debate is supposed to blindside the public into believing that Ron Paul should be the next president of the United States! It is published by Ron Paul-Hancock supporters! Obviously, this splashed cold water on the hot business side of the Ron Paul’s campaign to make money. And I do apologize for the collateral damage it caused to the members of the Ron Paul Cult who are in business.