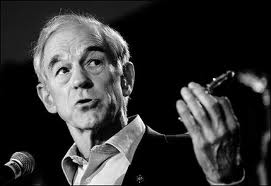 It was disgraceful how little time they gave Ron Paul in this debate. The vast majority of questions and 'airtime' went to Romney and Santorum. ...you'd never know Ron Paul was running in second place based on this.

Actually, the System will improve starting 2012. Congress will pass an election reform law. It will eliminate any "unelectable" candidate, especially coming "from the lunatic fringe" who would like to become president of the United States, just to make money during the presidential nomination campaign --like what the GOP now have!

Besides, there is no point badmouthing the other candidates, and there is no use throwing mud on the System and dirtying the people who run it. In the first place those accusations are not true – just a red herring to ventilate an anti-Establishment neurosis. In the second place, Ron Paul will never even be a GOP candidate for president; and in the third place, he will never ever become president of the United States not because blaming or "scapegoating" the System will work, but because of Ron Paul himself. He is the exact opposite of what it takes to become a U.S. president … he is the antithesis of the U.S. presidency, and this he doesn’t even know.

Doesn't anyone understand that Ron Paul will be marginalized at every turn? He is the only voice of reason amongst the social-engineering scum who are trying to maneuver their way into the presidency. There is no way that this man is going to be allowed to bring this nation back from the brink! He isn't one of the self-proclaimed "rulers", and the assholes who really run this country and the world aren't about to allow the man any form of credibility - least of all, a fair shot at what used to be the most powerful political position in the world. The powers that be are relying upon the mass to respond as the mass has almost always responded: they will vote for one of the shills and the world and the economy will continue to spiral out of control, until they have achieved their primary goal of domination...Then the real "fun" will begin...As I've often said, "Hug your kids, and apologize to them, you aren't likely to have time or the chance, later."

It is you – not I – who is ranting because you have nothing above your shoulders and therefore cannot argue the Ron Paul can of worms that I have just opened. Ad Hominem freaks rant, and just attack the singer for not understanding the song, to cure a painful neurosis. Intellectually, they are … abiotic. To dead brains, I am too much, like an intellectual locomotive that runs them over.

If you're going to get paid by the word to troll for Obama, why don't you cut & paste your rant on EVERY RP article on this website?  You missed a couple.

I agree it was disgraceful that Ron Paul was allowed to talk. He has no business being there when all he did was abuse the other candidates …

Observe this New Hampshire GOP debate CAREFULLY, and be honest to yourself of what you are looking at in this Videotape …! It is hard to cover up … it is hard to deny that Ron Paul stood up as a SORE THUMB in the debating panel!

He was worse than Obama standing there fuming and salivating in telling the American public that all the GOP candidates except him, are the dirtiest scams of the earth! Can you believe that???

For Heaven’s sake – he should have been shown the door on the way out right then and there! For, it’s obvious -- Ron Paul allowed himself to be Obama’s destructive weapon against the Republican Party in the coming 2012 presidential campaign. In the GOP, he is Obama’s self-destruct Manchurian Candidate programmed to destroy … Obama will use this weapon in the campaign trail … you mark my words!

In this New Hampshire debate, Ron Paul did nothing but SLANDER, Romney, Santorum and Gingrich of his delusional innuendoes. And the four of them, including the other candidate Perry, pointed out that Ron Paul ALWAYS makes accusations NOT based on facts … in short, what they are saying is that Ron Paul is a despicable LIAR! His lunatic accusations were FALSE and DELUSIONAL – anything at all he will spit out in front of the camera to catch public attention.

Also in this debate, Ron Paul’s published "racism letter" pinned him down as a congenital LIAR. He tried to wiggle out of the hole where he was trapped by denying that although what has been published UNDER HIS NAME some twenty years ago proved that he was a racist, he claimed HE DID NOT WRITE IT! The public is not stupid, as if he was talking to a retarded audience! But when one is delusional, don’t expect a person to be aware of what has just been said!

Although Ron Paul denied he wrote those racism charges, he went ballistic in slandering this nation that Blacks are discriminated against – an admission that as a racist, he was a Caucasian Black Supremacist! He wants Blacks to rise against the Whites and plunge this nation into a racial civil war!

Just a few days before this New Hampshire debate began, a NH newspaper had published a warning that Ron Paul was a "favored candidate of the lunatic fringe". It was followed by MSNBC’s description of Ron Paul [Chris Mathews’ talk show] that Ron Paul was "a delusional, paranoid, racist conspiracy theorist." In this perilous time in the history of the United States, "Paul was indeed a demon sent from the depths of hell to destroy humanity and plunge the planet into eternal darkness."

Note carefully that these are not my words. I am not attacking Ron Paul. I am just an opener of Ron Paul’s can of worms that the electorates have the right to know.

This Ron Paul highlights Video of the New Hampshire debate is supposed to blindside the public into believing that Ron Paul should be the next president of the United States! It is published by Ron Paul-Hancock supporters! Obviously, this splashed cold water on the hot business side of the Ron Paul’s campaign to make money. And I do apologize for the collateral damage it caused to the members of the Ron Paul Cult who are in business.

Unsubtle message across the skies.

Ron Paul: What if the People Wake Up?