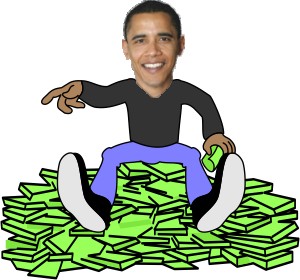 Now that Obama has proposed what purport to be cuts in the "defense" realm, the pro-military spending voices have become much louder. Articles are appearing in the main stream media claiming that "defense cuts may harm innovation,"

Money is not fuel.

Money does not work that way.

The economy is not fueled by money.  It is motivated (moved) by individual appetites.

This is based on a quote I heard ONCE and only once and it was attributed to Keynes:

The economy is driven by individual appetites that are instatiable.

One measure of economic growth is quantity.

Another measure of economic growth is quality.

Quantity is NOT the problem.

Quality is the problem.

Materially, individuals in the USoA live in superabundance.  By some estimates, a homeless person in the USoA is better off materially than 98% of the people in the world.

About 5 years ago, I heard a factoid during a conversation over a meal:  Over half the people in the world have never used a phone.  If true, that certainly supports the 98% figure just cited.

Economic growth results from ADAPTIVE activity, to draw an analogy to biology.  If the government dumps a bunch of money on the ground from a helicopter, who's making shoes?  Nobody!  Everybody is scrambling to get the money.  Which is more adaptive, making shoes (filling an appetite, meeting a genuine need), or scrambling around like idiots at a moonlight madness sale or at a black Friday store opening?!

Economic growth occurs when people know that conditions are favorable for them to meet those appetites.  For humans, are those appetites exclusively material?  No.  There is a non-material side of human needs.

Socio-economic conditions must allow people to satisfy both.  Whatever, if anything, "Fedral investment" (which amounts to the government seizing ownership with printed money) accomplishes, it is not likely to be the promotion of that favorable socio-economic environment -- which come to think of it, might accidentally "promote the general welfare".

Trust in those conditions - not money, paper or hard currency - is what fuels the economy.

Scott Atlas: The Evidence is In, Lockdowns Were Nothing But a "Massive Destruction" in Eve

US Gov't Started a Massive Wildfire, Burning 432 Homes, and Is Now Forcing Victims to Pay for It