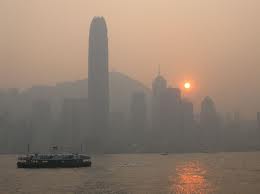 Worsening air quality in Hong Kong caused by vehicle emissions and industrial pollution from the neighboring Pearl River Delta is already forcing many in the financial community to move to Singapore.

Readings at three roadside monitoring stations in Hong Kong's Central, Causeway Bay and Mong Kok commercial districts showed that pollution levels were above the 100 mark more than 20 percent of the time, the newspaper said, citing the city's Environmental Protection Department.

This was 10 times worse than in 2005, when very high readings were recorded only 2 percent of the time, it said.

The station in Central business district, home to the Asia headquarters of global banks such as HSBC Holdings Plc and Goldman Sachs Group Inc, showed the worst figures, with excessive readings a quarter of the time, the report said.

Hourly readings are taken at the roadside stations throughout the year on major pollutants such as respirable suspended particles and nitrogen oxides. A reading above 100 means at least one pollutant fails air quality objectives.