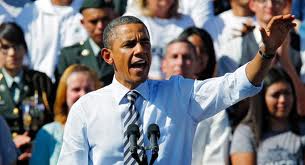 Christie, appearing alongside GOP presidential front-runner Mitt Romney at a campaign rally at a high school here, accused the president of a cynical effort to redirect the anger of the American people by appearing angry himself.

“I have a suggestion for the president: He doesn’t do angry well,” Christie said. “He understands that the American people are angry and they’re scared and they’re worried about the future. So he’s decided, in the most cynical reelection strategy that you could ever think of, that he doesn’t care if you’re angry, he just wants you to be angry at somebody else.”

As with other New Hampshire gatherings, the Romney-Christie event was marked at least in part by protesters.

The demonstrators began by chanting “Mitt kills jobs” when Romney spoke and then, when the microphone was handed to Christie, shifted to “Christie kills jobs.”

"No man has yet produced any revelation from heaven in his favor, any divine communication to govern his fellow men. Nature throws us all into the world equal and alike.... Ambition is one of the more ungovernable passions of the human heart. The love of power is insatiable and uncontrollable.... There is danger from all men. The only maxim of a free government ought to be to trust no man living with power to endanger the public liberty. The preservation of liberty depends upon the intellectual and moral character of the people. As long as knowledge and virtue are diffused generally among the body of a nation, it is impossible they should be enslaved...." John Adams