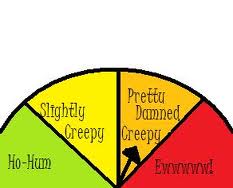 This one registers a solid 10 on the Creep-o-Meter:

A woman (I’m leaving her name out on purpose) was recently pulled over for “speeding” by Chicago cop, Chris Collins. The cop issued her a piece of payin’ paper, but apparently that was merely foreplay. Collins later did a search for the woman’s home address in the state motor vehicle database, then went to her home and left a note on her car asking her out on a date.

Here’s some of the actual text, first published after the AP got hold of the court documents:

“It’s Chris … that ugly bald Stickney cop who gave you that ticket. … I know this may seem crazy and you’re probably right, but truth is I have not stopped thinking about you since. I don’t expect a girl as attractive as you to … even go for a guy like me, but I’m taking a shot anyways.”

Drew Peterson, you’ve got an amigo!

Not surprisingly, the woman was extremely creeped out by all this – which she not unreasonable construed as mildly threatening in addition to being extremely invasive of her privacy. In her lawsuit, filed shortly after finding out she was being cop-stalked, she described the “great fear and anxiety” the situation caused her and that she felt she was being “manipulated” by Collins into some sort of sick, force-fed “relationship” with a person who is probably someone she had hoped to never see or have to deal with again.