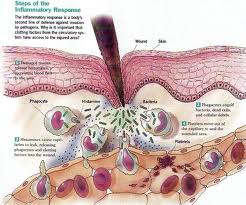 Inflammation is one of those words that people use without really thinking about its actual meaning. So today we're going to take a bit of a break from the blood lipid series to cover inflammation. In later posts, I'll dig deeper into how the inflammatory response works with stuff like exercise and heart disease, but for now, I'll just get the basics out there.

Existence is suffering, according to certain schools of thought. I don't know that I'd go quite that far, but I would emphatically state that anyone who spends a modicum of sentient time in the space time continuum we call existence is gonna experience some unpleasantness. A bump on the knee, a bacterial infection, an acute injury, a persistent illness, a death of a loved one, a broken heart. It's a big and often angry world that doesn't necessarily care about you, and something's gotta give. When that happens and the sanctity of our bodies is interrupted by pain, injury, or illness, our bodies respond with inflammation.

There's that word again: inflammation. It pops up quite often in our circles, usually playing either the starring role, absolutely killing it as a supporting actor, or stealing the show with a cameo appearance in some malady or another. Heart disease, obesity, depression, arthritis (and any -itis, really), autoimmune diseases, insulin resistance – all classics worthy of accolades (although tonsillitis totally got robbed in last years Oscars), and all linked to inflammation, sometimes even causally. So inflammation must be terrible, right? It must be completely and unequivocally a negative trait, kinda like how our body evolved to manufacture cholesterol to kill us. What, didn't you know that coronary heart disease confers a survival advantage?

Jokes aside, the fact that inflammation is a common, natural, innate response to injury/pain/illness/stress is a hint that there's probably something necessary about it. It's not some accident, nor is it our body hell-bent on making life miserable for itself. On the contrary: inflammation is our body's way of saying it isn't gonna take the affront of injury or illness lying down. It's not a passive spectator totally reliant on the kindness of Pfizer and Walgreens and an ice pack to get it out of a jam. Although you wouldn't think it, what with the barrage of altruistic allknowing medical experts and commercials both touting some essential pharmaceutical, our bodies can actually heal themselves. And the first responder, so to speak, is the inflammatory process. That's right. Pain, swelling, redness, and that radiating sense of warmth that we feel at the site of an injury or illness don't manifest by accident or for kicks. That's inflammation, and it's essential to our very existence in a world of hurt.