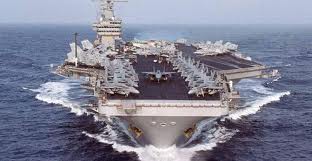 US, Russian French and British air and naval forces streamed to the Syrian and Iranian coasts over the weekend on guard for fresh developments at the two Middle East flashpoints.

The Russian carrier Admiral Kuznetsov anchored earlier than planned at Syria’s Tartus port on the Mediterranean Sunday, Jan. 8, arriving together with the destroyer Admiral Chabanenko and frigateYaroslav Mudry.
To counter this movement, France consigned an air defense destroyer Forbin to the waters off Tartus.

DEBKAfile’s military sources report a buildup in the last 48 hours of western naval forces opposite Iran in the Persian Gulf and Arabian Sea in readiness for Tehran to carry out its threat to close the Strait of Hormuz.

Britain has dispatched the HMS Daring, a Type 45 destroyer armed with new technology for shooting down missiles, to the Sea of Oman, due to arrive at the same time as the FrenchCharles de Gaulle aircraft carrier.

Our sources report too that Saturday, the giant RQ-4 Global Hawk UAV, took off from the USS Stenning aircraft carrier for surveillance over the coasts of Iran. The Stennis and its strike group are cruising in the Sea of Oman at the entrance to the Strait of Hormuz after Tehran announced it would not be allowed to cross through.