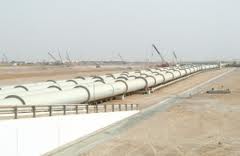 Oil prices have remained elevated in recent weeks as Iran has threatened to block the strait should the West impose tougher sanctions on its oil industry as part of a standoff over Tehran's nuclear program.

The narrow strip of water that separates Oman and Iran is the world's most important oil shipping lane, which connects the biggest Gulf producers such as Saudi Arabia, Iran, Iraq and the United Arab Emirates with world markets.

Flows through the strait are estimated at around 15-17 million barrels per day (bpd), or just under a fifth of global supplies, and a new pipeline would bypass it to carry most of the UAE's oil, 1.5 million bpd, to global markets.

"The pipeline is almost complete. Hopefully it will be operational within six months, by May, June," the UAE's oil minister, Mohammed bin Dhaen al-Hamli, told reporters on the sidelines of an energy conference in Abu Dhabi.