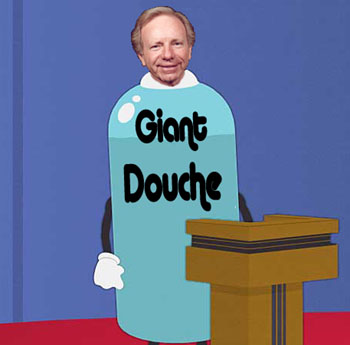 First, Congress considered the National Defense Authorization Act, sections of which gave the President the authority to use the military to arrest and indefinitely detain Americans without trial or charge. The language was revised because of strong condemnation from the American people. But now a new bill has emerged that poses yet another threat to the American citizenry.
Congress is considering HR 3166 and S. 1698 also known as the Enemy Expatriation Act, sponsored by Joe Lieberman (I-CT) and Charles Dent (R-PA). This bill would give the US government the power to strip Americans of their citizenship without being convicted of being “hostile” against the United States. In other words, you can be stripped of your nationality for “engaging in, or purposefully and materially supporting, hostilities against the United States.” Legally, the term “hostilities” means any conflict subject to the laws of war but considering the fact that the War on Terror is a little ambiguous and encompassing, any action could be labeled as supporting terrorism. Since the Occupy movement began, conservatives have been trying to paint the protesters as terrorists.

all I have to say to this is:

Re: Multi-State Recall Petitions of Congressman that voted for (NDAA)
The National Defense Authorization ACT of 2012

Under the passed National Defense Authorization, could some Americans be (Retroactively) subject to Indefinite U.S. Military or Prison Detention without charges or right to an attorney or trial? Consider that most American activists don’t know what other activists and groups they networked or associated did in the past—perhaps illegal. Both the National Authorization Act of 2012 and USA Patriot Act are expansive and vague—what constitutes (1) a terrorist act, (2) supporting or aiding terrorists; (3) when someone is a “Combatant” or (4) “a Belligerent.” For example, Americans advocating, attending or supporting a meeting or protest demonstration against a U.S. Government Agency; Policy or U.S. Military Action—could be charged with (1) (2) (3) and (4) under NDAA and the Patriot Act.

History Repeats Itself: When other countries passed Police State Laws like The Defense Authorization Act of 2012, Citizens increasingly abstained from politically speaking out; visiting activist websites or writing comments that might be deemed inappropriate by the Police State Government, e.g. cause someone to lose their job; be investigated; disappeared, and or detained in Police/Military Custody. Some writers might be dead-meat under NDAA. It appears that “Americans” who write on the Internet or verbally express an opinion against any entity of U.S. Government or its coalition partners—may under the Patriot Act or The Defense Authorization Act—be deemed by U.S. Government (someone likely to engage in, support or provoke violent acts or threaten National Security—to order an American writer’s indefinite military or prison detention.

Is NDAA Retroactive? Can U.S. Government invoke provisions of NDAA or the Patriot Act to assert a U.S. Citizen’s past or current writings (protected by the 1st Amendment) have supported or aided terrorists; provoked combatants or belligerents as a premise to order an author’s Indefinite Detention? The Defense Authorization Act of 2012 did more than Chill Free Speech—it may FREEZE IT!

It should be expected that indefinitely detained U.S. Citizens not involved in terrorism or hostile activities, not given Miranda Warnings when interrogated or allowed legal counsel; will also be prosecuted for non-terrorist (ordinary crimes) because of their (alleged admissions) while held in Indefinite Detention. See below: Hitler’s 1933 Fascist Laws that might appear mild in several respects when set side by side with the National Authorization Act of 2012.

Section 2
If in a state the measures necessary for the restoration of public security and order are not taken, the Reich Government may temporarily take over the powers of the highest state authority.

Section 4
Whoever provokes, or appeals for or incites to the disobedience of the orders given out by the supreme state authorities or the authorities subject to then for the execution of this decree, or the orders given by the Reich Government according to Section 2, is punishable—insofar as the deed, is not covered by the decree with more severe punishment and with imprisonment of not less that one month, or with a fine from 150 up to 15,000 Reich marks.

Section 5
The crimes which under the Criminal Code are punishable with penitentiary for life are to be punished with death: i.e., in Sections 81 (high treason), 229 (poisoning), 306 (arson), 311 (explosion), 312 (floods), 315, paragraph 2 (damage to railroad properties, 324 (general poisoning).
Insofar as a more severe punishment has not been previously provided for, the following are punishable with death or with life imprisonment or with imprisonment not to exceed 15 years:

1.    Anyone who undertakes to kill the Reich President or a member or a commissioner of the Reich Government or of a state government, or provokes to such a killing, or agrees to commit it, or accepts such an offer, or conspires with another for such a murder;
2.    Anyone who under Section 115 (2) of the Criminal Code (serious rioting) or of Section 125 (2) of the Criminal Code (serious disturbance of the peace) commits the act with arms or cooperates consciously and intentionally with an armed person;
3.    Anyone who commits a kidnapping under Section 239 of the Criminal with the intention of making use of the kidnapped person as a hostage in the political struggle.

Most of the people I talk to don't understand what U.S. citizenship is. And they don't care.

If you are a U.S. citizen, you are a citizen of Washington D.C.. You received D.C. citizenship by being born of parents who were D.C. citizens, or you were naturalized and have paperwork to prove it. Why? Because the Constitutional laws say so.

Otherwise, if you were born in, and live in one of the 50 States, you are a State Citizen of that State according to its rules of State Citizenship.

However, if you say you are this or that, and it is beneficial for Government to accept what you say as the truth, well, you did it to yourself.

Now, you might have to fight some court battles to prove your State Citizenship, but you are probably not a U.S. citizen already.