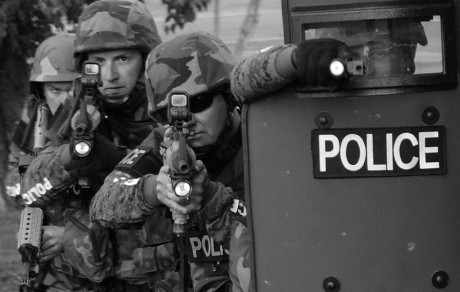 One of the unique things about the Constitution of the United States was that it guaranteed certain rights for its citizens.  Those rights provided the foundation for an era of freedom and prosperity that was pretty much unprecedented in human history and dozens of other nations eventually copied many of the ideas contained in our Constitution and Bill of Rights because they worked so well.  Of course our system never functioned perfectly, butwhen you compare it to what has gone on for most of human history, it truly was a bright light in a sea of oppression and totalitarianism.  Unfortunately, our rights are now being systematically taken away from us.  In America today, the politicians have convinced most of us that in order to keep us all "safe" we must give up many of our rights and move toward becoming a totalitarian police state.  In the "new America", you don't get any rights.  They tell us that giving people rights is too dangerous.  Instead, you get some limited "privileges" which can be revoked at any time by the authorities.  Sadly, most Americans have become so dumbed-down that they don't even realize what is happening.

How many Americans do you think have actually read the Constitution?

Personally, I went through high school, college and even law school without ever being required to read the Constitution of the United States.

5 Comments in Response to Rights? In The New America You Don’t Get Any Rights!

Where do rights originally come from? Aren't they given to us at the time of conception, even though they are under trust to our parents until we reach adulthood?

The WHOLE question of rights revolves around the thought of, Who has the right to remove someone else's rights? Does government have this right? Do other people have this right?

When anyone removes your rights when you have not done the same to others first, there are "wrongs" being done to you. People talk about rights. But nobody talks about "wrongs."

A wrong happens when someone removes the ability of another to exercise his rights, without cause.

So, is it a right of Government people to do wrongs to other people? NEVER!

Isn't it time for all Americans to use their rights to put down the wrongs that Government does?

One of the unique things about the Constitution of the United States was that it guaranteed certain rights for its citizens.

Comment:  By some reads, the rights were guaranteed to as few as 39 people - those who signed the letter of transmittal.  Not even the 1,700 or so delegates who voted for its ratification were covered.  The rest of "the inhabitants of these states".  Hmmm

Comment:  While it is true that a few on the continent fared handsomely, and maybe even those on the bottom socio-economic rungs did better than elsewhere, maybe that is better attributed to a continent fabulously endowed with natural resources.  By some accounts, Pilgrims were dipping fish out of the Chesapeake Bay using skillets.  Fish were actually jumping into the boats!

dozens of other nations eventually copied many of the ideas contained in our Constitution and Bill of Rights because they worked so well.

Comment:  True, the constitutions of many other nations resemble ours.  However, how many of those nations were creations of the disastrous interventionist foreign policy practiced in our names by our dear and fabulously wealthy country.

Unfortunately, our rights are now being systematically taken away from us.

How many Americans do you think have actually read the Constitution?

Personally, I went through high school, college and even law school without ever being required to read the Constitution of the United States.

Comment:  I estimate that of the 15,000 hours I spent getting a high school diploma, less than 10 hours were spent on the Constitution.  In an informal poll taken at a legal reform meeting attended by 700 people, results were than fewer than 20 had received more than 10 hours.  They had all graduated from high school before 1950.

The CONstitution doesn't guarantee anything except a central government over the states.

The CONstitution was ratified (approved) by nine of the states with the understanding that a list of our God given (not CONstitution given) Rights would be incorporated as the price of the CONstitution's passage and that the CONstitution would guarantee these Rights above all else as the new central government's sole purpose of existence.  These Rights existed to all of the world's human inhabitants (except the enslaved apparently) not just citizens of the United States and the guarantee would apply to all within the governed of the USA.

Since this sole role of the created government has been abrogated it is our duty to abolish the federal government and all governments that endorse it...it says so in another archaic pay no attention to this document.

Those who are taking out 'rights' are doing so because they have no fear of 'we the people'.  They know we have become too fat, dumb, and lazy, and too dependent on the Govt's handouts, and they know we will not take up arms against them, no matter what they do to us.  Tyranny has won, America is dead.

Apparently, "reading" the Constitution was of limited help to the author.

We're not "its citizens".