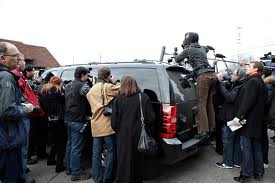 “Dr. Paul has been committed to meeting one on one with New Hampshire voters, and has aggressively campaigned at town halls, house parties, and meet and greets since early last spring.

“This morning, he attempted to hold an event at Moe Joe’s Diner in Manchester, to speak with patrons and supporters in the last push before the New Hampshire primary. Unfortunately, Dr. Paul and his family were forced to leave early after over 120 members of the press created a mob-like atmosphere that was deemed to be unsafe for the candidate, Moe Joe’s customers, and reporters themselves.

“The campaign had planned to cover our normal degree of media interest, which is always ample. However, a significant increase in the press corps, largely driven by an influx of foreign journalists, exceeded all expectations.

“Mrs. Paul herself, attempting to campaign alongside her husband, was shoved aside by one reporter and told to “get out of the way.”

“While we are very welcoming of media coverage and grateful for the interest in Dr. Paul and his campaign, basic safety simply must come first. On behalf of Dr. Paul and his campaign team, I would like to apologize to customers at Moe Joe’s who may have been distressed by this incident, and extend our gratitude and apologies to the owners, who were kind enough to have us.

“We ask the press, at all upcoming events over the next day and a half, to be respectful of both Dr. Paul and of New Hampshire voters, who are entitled to examine their candidates in a safe and responsible atmosphere.”

Big media might reprimand their journalists... they might not print or otherwise report Ron Paul, but the little guy on the street is getting the picture. The Ron Paul freedom platform is gaining the interest of everybody. And the Internet is reporting what big media will not!