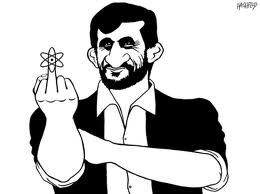 "Despite those arrogant people who do not wish us to be together, we will unite forever," the Iranian president told Venezuela's socialist leader Chavez at the start of a visit to four left-leaning Latin American nations.

Despite their geographical distance, the fiery anti-U.S. ideologues have forged increasingly close ties between their fellow OPEC nations in recent years, although concrete projects have often lagged behind the rhetoric.

Ahmadinejad was in Venezuela at the start of a tour intended to shore up support as expanded Western economic sanctions kick in over the Islamic Republic's nuclear program.

"The imperialist madness has been unleashed in a way that has not been seen for a long time," Chavez said in a ceremony to welcome Ahmadinejad at his presidential palace in Caracas.

Both men hugged, beamed, held hands and showered each other with praise.