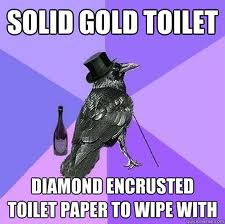 The global economy is in turmoil. Europe is on the verge of collapse, probably taking the US down with it. As the euro-crisis worsens, we march ever closer to outright monetization of European debt by the ECB and, covertly, by the Federal Reserve. The developed world is perilously close to a monetary deluge that could make the Weimar Republic's hyperinflation look like amateur hour.

Yet, I still talk to Wall Street analysts who clearly misunderstand gold's place in a portfolio. Meanwhile, many people who are part of the world's wealthy class are hoarding gold. What do they know that others don't?

If you ask the common man in the street about investing in gold, most will give you a strange look. After all, they believe investing is about stocks, bonds, and CDs.

If you ask someone with a bit more investing knowledge, they will tell you to buy gold during inflationary periods.

However, if you ask the world's wealthy class about gold they will give you a very different answer. At Plan B Economics, we've found that most of the world's wealthy class doesn't view gold as an investment at all! I would argue these folks have it right. Simply put, they consider gold to be a store of wealth and believe that anytime is a good time to own some gold.