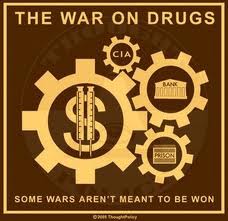 The drug war is not to protect the children, save the babies, shield the neighborhoods, or preserve the rain forests. The drug war is a violent campaign against black men and by extension the black family, among many others.”— Wilton D. Alston, “How Can Anyone Not Realize the War on (Some) Drugs Is Racist?” LewRockwell.com (June 24, 2011)

After more than 40 years and at least $1 trillion, America’s so-called “war on drugs” ranks as the longest-running, most expensive and least effective war effort by the American government. Four decades after Richard Nixon declared that “America’s public enemy No. 1 in the United States is drug abuse,” drug use continues unabated, the prison population has increased six fold to over two million inmates (half a million of whom are there for nonviolent drug offenses), SWAT team raids for minor drug offenses have become more common, and in the process, billions of tax dollars have been squandered.