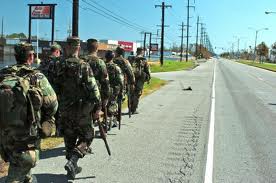 Those claiming to protect the 'Land of the Free' are actually its biggest enemies...

WE ARE seeing the destruction of an empire, writes Bill Bonner in his Daily Reckoning.

All empires must go away sometime. They are natural things. And nature puts a time bomb in everything she creates.

The US empire is doomed. Just like all the others that went before it. It is doomed by nature herself — condemned by the gods to blow up and die.

None of this should be surprising to you, dear reader. We've seen this movie before. Hundreds of empires have come and gone. We know how this movie ends. More or less.

What we know for sure is that the US is going broke. There is hardly any other plausible outcome. We've gone over the numbers so often we don't need to repeat them.

Yes, it is true that the feds could still save themselves...if they had the will. They could cut taxes to a flat 10%...and spend only what they raised in tax revenue... That would do the trick from an economic point of view.

But it's too late for that — politically. Empires have lives of their own. They go forward...expanding...spending...stretching...until, boom, they go too far. Empires do not back up.