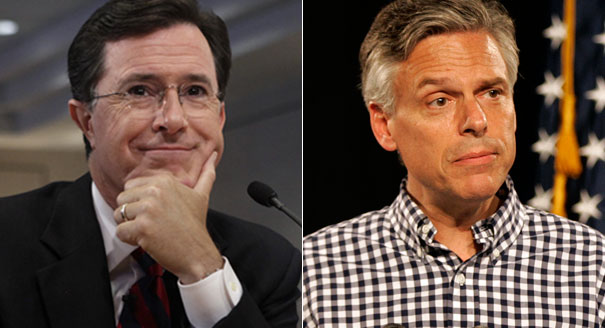 This is not a joke, but it’s kind of funny: Stephen Colbert would edge out Jon Huntsman in the South Carolina Republican primary.

That’s according to a Public Policy Polling survey out Tuesday that found the late-night comic picking up 5 percent of the vote, compared with Huntsman’s 4 percent.

On the serious side, Mitt Romney had 27 percent, Newt Gingrich 23 percent, Rick Santorum 18 percent, while Ron Paul came in with 8 percent and Rick Perry 7 percent, according to the poll.

Soon after the poll’s release, Huntsman laughed off PPP’s findings in an interview on Fox News Tuesday afternoon.

“Well, when I was on his show recently, he promised me the ‘Colbert bump’ — I think we’re getting that here in New Hampshire,” he said. “Now we’re going to be looking for the Colbert bump in South Carolina.”
And, just for fun: