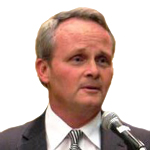 The Daily Bell is pleased to publish this interview with Foundation for Economic Education President Lawrence Reed (left).

Introduction: On September 1, 2008, Lawrence W. (Larry) Reed assumed the presidency of the Foundation for Economic Education, headquartered in Irvington, New York. After serving as President of the Mackinac Center for Public Policy for its first two decades, Reed became president emeritus of the Center upon assuming his duties as president of FEE. Reed holds a B.A. degree in Economics from Grove City College (1975) and an M.A. degree in History from Slippery Rock State University (1978), both in Pennsylvania. He taught economics at Michigan’s Northwood University from 1977 to 1984 and chaired the Department of Economics from 1982 to 1984. He designed the university’s unique dual major in Economics and Business Management and founded its annual, highly acclaimed “Freedom Seminar." In 1982, he was a major party candidate in the general election for the US House of Representatives from Michigan’s 4th district. He moved to Boise, Idaho in 1984 to direct a policy institute there before moving back to Michigan to head up the Mackinac Center in December 1987. In the past 20 years he has authored over 1,000 newspaper columns and articles, dozens of articles in magazines and journals in the US and abroad and five books. His articles have appeared in The Wall Street Journal, Christian Science Monitor, USA Today, Baltimore Sun, Detroit News and Detroit Free Press, among many others. Reed’s most recent book is Striking the Root: Essays on Liberty. Since 1978, he has delivered more than 1,000 speeches in 40 states and 15 foreign countries, including one at People’s University in Beijing, China.

Daily Bell: You are president of the Foundation for Economic Education, FEE. Tell us about the famous FEE and its libertarian role historically.

Lawrence Reed: FEE is the oldest educational organization in the United States devoted explicitly to advancing the economic and moral principles of a free society. Founded in 1946 by the late Leonard Read, FEE for many years was both a physical and an intellectual refuge for the tiny minority of people who saw the rise of statism in the 20th century for the serious threat that it was. In the 1950s and 1960s, before sister organizations were formed to help carry the torch, FEE helped promote the works of Ludwig von Mises, F. A. Hayek, Henry Hazlitt and other, often-lonely, free-market scholars. Today, hundreds of such organizations exist around the world and many of them are led by people who were inspired by FEE seminars or publications earlier in their intellectual careers. We played a very key role in igniting what is now a thriving, international movement on behalf of the ideas of liberty.