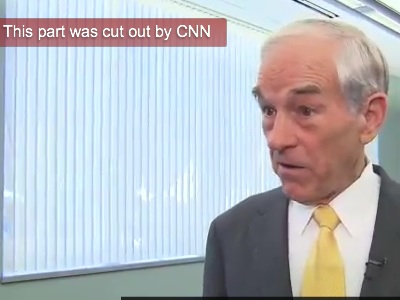 In the past couple of days, we've discussed the "media blackout" that Ron Paul supporters feel is in effect with respect to their candidate.

We explained that, at our publication, there is no such blackout — that, in fact, we can't write about Ron Paul enough.

Why can't we write about Ron Paul enough?

Because Ron Paul's supporters are positively nuts about him, and they immediately read everything we write. (We love readers, so we're eager to write stuff readers want to read.)

We also explained why we thought the rest of the media-sphere is not covering Ron Paul as much as Ron Paul supporters think they should be: Because the media has concluded that Ron Paul can't win.

(Why has the media concluded that Ron Paul can't win? Because Ron Paul's views, while refreshing, are too extreme to appeal to mainstream voters, and many of them think he is a nutbag.)

Well, this explanation prompted Ron Paul's supporters to send us a lot of mail.

2 Comments in Response to Check Out The Letters We Got When We Told The Truth About Ron Paul ...

Keep aiming for their testicles.  When they scream, you've arrived.

Have you noticed how -- more and more often these days -- news commentators are editorializing when they're supposed to be reporting facts?