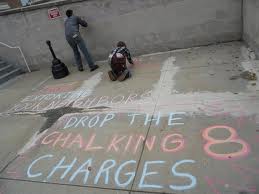 His “crime”? Highlighting the double-standards claimed by some who wear “Manchester Police Department” badges on their costumes*. After a six-month ordeal, Ademo was found guilty of two “class a misdemeanors” for resisting (going limp) and one “class b misdemeanor” (for using children’s chalk on a public building).

“Prosecutor” Gregory Muller started by reciting Ademo’s past run-ins with individuals who claim the “legitimate” right to use force in an arbitrary political boundary.Included in that list-of-actions-that-had-no-victims was Ademo’s 2007 felony (for having a plant some strangers deemed “illicit”). Muller proclaimed that the previously levied sentences had had no deterrent or punitive impact.

As such, for his two “class a offenses,” Muller advocated for Ademo be caged for 12-months, with 10-months stayed (concurrent sentence). For his “class b offense” Muller claimed “the state” was owed 375-FRNs.

William H. Lyons (who wore a black robe) asked Ademo to comment on what he had heard. Per the monetary claim, he stated that he’d be willing to do community service and even pay “a reasonable amount.” Per the cage time threatened Ademo pointed-out the big discrepancy that existed between the action and penalty, and that the 2 1/2 days he’d already spent in a cage (arrested on Sat. June 4th and arraigned on Mon. June 6th) were more than adequate.

You should have challenged their jurisdiction. Then again these criminals hiding behind respectability write their own laws from the bench anyway and have their drones with guns and badges enforce their agendas. And of course the drones don't really know the truth let alone care because their pay checks depend on them not knowing. Land of the free? NOT.  Home of the slave.